Officials broke ground Tuesday on a major park that is set to enhance the city's riverfront and enliven downtown.

The Ralph C. Wilson Centennial Park is the final part of the Detroit Riverfront Conservancy's master plan of revitalizing 5.5 miles along the river. The park, a $75 million investment, is stationed on the west side of the riverfront near the site of the former Joe Louis Arena and will consist of 22 acres of playscapes and recreational spaces.

"The history of Detroit's riverfront for over 100 years was a history of wasted opportunity and blight," said Mark Wallace, president and CEO of the Detroit Riverfront Conservancy, reflecting on the riverfront's history and the chain of events that led to Tuesday's groundbreaking. "There were many places that were really important to us that had fallen into disrepair, and there were many people coming around town with big ideas and big promises that never came true. We knew that people were skeptical when we started talking about the vision for the RiverWalk, and we heard that skepticism at basically every community meeting we attended." 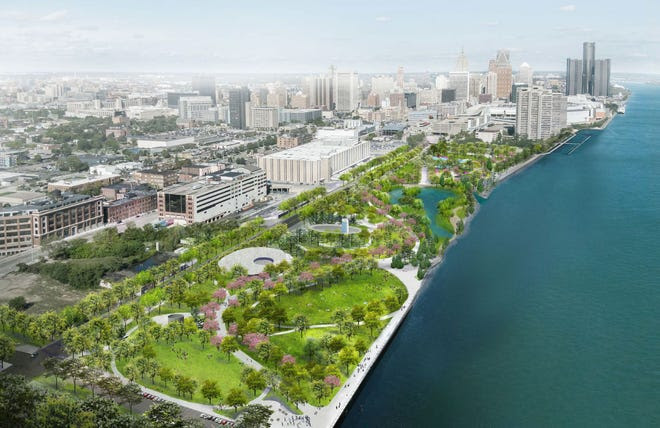 The Ralph C. Wilson Park has been in the works since 2018, the effort kicked off with a $40 million commitment from the Ralph C. Wilson Jr. Foundation. Since then, leaders with the DRC visited parks nationwide to study and bring back the best features to Detroit, and a community advisory team for the park gathered input from Detroit residents through more than 100 community meetings.

Also during Tuesday's groundbreaking was an announcement of $7 million in new support for the park from a number of organizations, with $2.5 million from the DTE Energy Foundation.

During the groundbreaking, Lt. Gov. Garlin Gilchrist II praised the collaborative effort and said the park is going to be an "international jewel."

"We're going to continue to support these kinds of projects that make it so that Michiganders can come together, that this international jewel will be enjoyed by people from every corner of both peninsulas of the state of Michigan when they come here to have fun and to build memories because that's what this is all about," Gilchrist said. "We are happier. We are better connected. And we are healthier, because we are investing in spaces and opportunities like this one."

A portion of the park will be a water garden lined with trees and greenery where visitors can sit and dip their feet, and through a partnership with the Huron-Clinton Metroparks, educational programming on wildlife and conservancy will be provided.

Construction is expected to begin within coming months and be completed by late summer 2024.