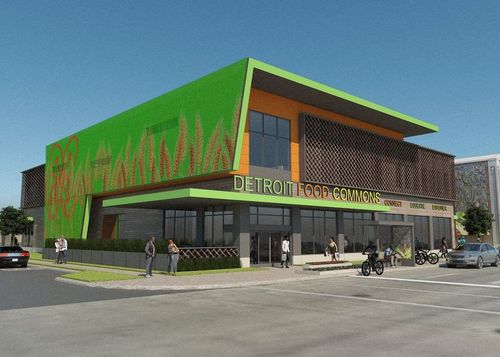 The Detroit People's Food Co-op is expected to open in the city's North End by summer 2023. (Photo: Facebook)

A planned Black-led food co-op that says it will be the only such grocer in the Midwest is seeking members to help shape its development.

The Detroit People's Food Co-op will be in an $18-million grocery development expected to open in the city's North End by the summer of 2023.

Lifetime memberships are $200. Though not required to shop at the store, they come with an ownership stake, voting rights on its board, periodic discounts and a share in profits. Plus, signing up helps "oppose extractive economic practices by circulating money in our community" and "contribute to a cooperative economy rooted in justice and equity," the co-op's website says.

Malik Yakini, founder of the group behind the co-op, spoke to Crain's about the development last month as it was approved for state tax incentives and a grant.

Yakini ... said it is needed because of a lack of quality food options in the North End neighborhood.

He said the single grocery store in the area often garners neighborhood resident complaints about food quality and store cleanliness.

"More so, there is a need in the entire city of Detroit for a grocery store that is community owned, which makes this project unique," Yakini said. "It's owned by the member owners. That's a very different model than a corporation coming in and opening a store in the community. Community residents get to shape the store and determine how it proceeds."

He also highlighted that the building would feature kitchen space for food entrepreneurs and shelves stocked with local produce.

Membership information is here. One backer suggests considering them for holiday gifts.