To request a speed hump, go to detroitmi.gov/dpw. 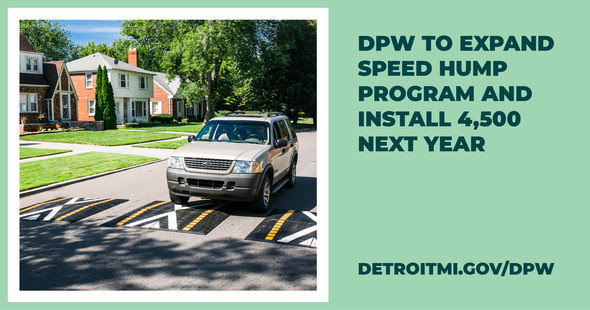 The City first tested the speed humps in 2018 as a way to reduce speeding and improve safety in neighborhoods. As a result of a favorable response from residents, DPW will nearly quadruple the number of speed hump installations for 2021 from the 1200 installed this year. The City has allocated $11.5 million for the 2021 program, utilizing state transportation funds and planned capital projects that have been reprioritized.

In 2021, some of the determining factors for a street to receive a speed hump will include:

Residents are reminded that simply submitting a speed hump request does not guarantee that they will be installed. The City’s traffic engineering team will assess all requests received to ensure the above criteria is met.

To request a speed hump, go to detroitmi.gov/dpw.