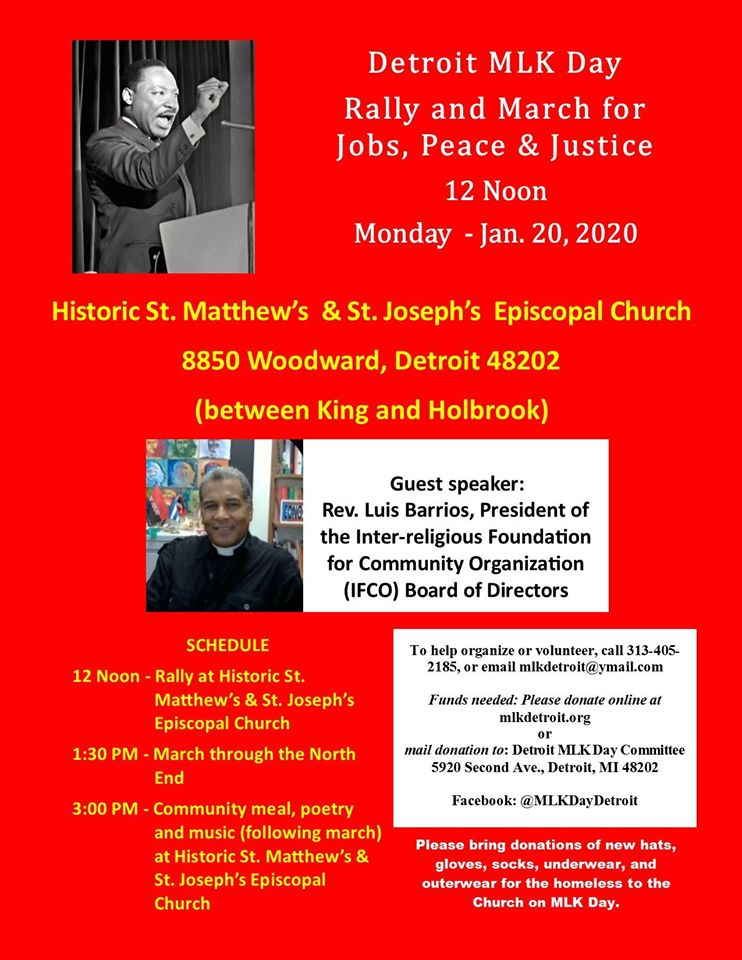 This year's 17th Annual Dr. Martin Luther King, Jr. Day Rally & March comes at a time of rising hatred, bigotry and military conflict both inside the United States and around the world. The Detroit MLK Day Committee is once again requesting your participation and support to continue this tradition which mobilizes the largest social justice gathering in the whole of southeastern Michigan.

On Monday, January 20, 2020, the Detroit MLK Day Program/Rally and March will commemorate the 91th birthday of Dr. King. This year's program will feature keynote speaker Dr. Luis Barrios, the President of the Inter-religious Foundation for Community Organization (IFCO) Board of Directors based in New York City.

IFCO has been in the leadership of various community and international campaigns since its founding in 1966. In late April 1969, IFCO sponsored the National Black Economic Development Conference (NBEDC) at Wayne State University (WSU) which put forward the first modern-day call for reparations to be paid to African Americans for the stolen labor during slavery and the national oppression in which they have lived under since the conclusion of the Civil War (1861-1865).

In addition to its work on domestic issues, IFCO has coordinated the education of over 150 students who studied medicine for free at the Latin American School of Medicine (ELAM) in the Republic of Cuba. Numerous youth from Detroit along with other cities have taken advantage of this program. The recruitment of these young people was initiated by Rev. Dr. Lucius Walker, the founder of IFCO, as well as former City Council member Rev. Dr. JoAnn Watson.

You are cordially invited to attend this 17th Annual Detroit MLK Day event for the second year at our new location of the Historic St. Mathew’s-St. Joseph’s Episcopal Church located at 8850 Woodward Avenue between King and Holbrook in the city’s North End neighborhood. This venue which is a historic institution in Detroit having played an integral part in the 19th century Underground Railroad and the Northern High School Student Strike of April 1966, among other important events, will place us in the heart of the city in a community where gentrification, water shutoffs and tax foreclosures continue to take a serious toll.

The program begins at 12 noon in the sanctuary and will include music and brief messages from cultural workers and activists from throughout the region.

At about 1:30 p.m., the Detroit MLK Day March for Jobs, Peace and Justice will begin. At 3:00 p.m., a special cultural program of poetry and music will take place at the church. A healthy community meal will be served.

The Detroit MLK Day Committee is comprised of a small, dedicated group of volunteers. Due to the significance of the January 20, 2020 Detroit MLK Day Program & March, we are seeking contributions now to assure a successful event.

Thank you for your kind support! (You may download event leaflets at www.mlkdetroit.org.)

Sincerely in Peace and Solidarity,
The Detroit MLK Day Committee

MLK Day: Beyond the Dream

Public
· Hosted by Detroit Historical Museum and 3 others
Monday, January 20, 2020 at 10 AM – 2 PM
Free
Register:  https://1066.blackbaudhosting.com/1066/MLK-Day-Beyond-the-Dream?fbclid=IwAR1Ed2XihB-eWQ053smvQ2jdKfN4xf1SlcEqoqw4suBrEhNUr98GMxhaKKc
Celebrate the life and labor of Martin Luther King, Jr. "Beyond the Dream" at the Detroit Historical Museum, hosted in partnership with the Black Historic Sites Committee.

This annual program will feature dynamic programs throughout the day, including special guided tours of the internationally acclaimed exhibition, Detroit 67: Perspectives, live footage of Dr. King's speeches, an activity book building craft, "Dream Drip", a workshop for older youth who will have the opportunity to create their very own rap song inspired by the words of Dr. King, wonderful live performances and more!